I think it's fair to say that most of this blog post will be written while I'm listening to this song, so it is probably worth mentioning. I love the Wailin' Jennys, no matter what song they are doing, but this one in particular is just a really calming version of this traditional song. Anytime they do acapella arrangements, I melt. So clean. Such tight harmonies. I'm in love.

That is not, however what this post is about. This is about an issue that has continued to pop up in my consciousness over the past few months. Incidentally, whenever it's popped up for me I've posted about it on Facebook, so if you've been following there you've probably heard me talk about it a little bit. I just haven't gotten really deep into my thoughts and opinions about it all.

What I'm talking about is simple: the issue of GamerGate, or more specifically, the role of females in the video game industry.

I'm not going to go into the whole historical record part of GamerGate, or anything like that. Other people have done it better, and if you Google it I can guarantee that you will find a number of news articles from reputable papers that get into it. I can't make such a guarantee on YouTube, where it's about 50% good videos from good sources and 50% "we hate you all so go die!" with a lot more profanity and stuff. So go in at your own risk. My take on the whole issue is this: People pointed out a legitimate issue, and a bunch of really immature people confirmed every freaking stereotype by getting butthurt and going after anyone who disagreed with them in some of the most damaging ways possible.

Now I'm coming at this issue from two ways: One, I was out of the world when this all hit the fan, and not really paying attention to anything besides survival so it's taken me awhile to sort out different opinions and formulate an idea on this. And I've watched a lot of Anita Saarkesian's videos (her being the main figurehead of the pushback against sexism in games and gaming communities). And I've watched a lot of videos and read articles by people about this issue. What hits me after all this is that this is not just an issue with gaming. I'm not even going to really talk about gaming that much here because frankly, that's been done and done again. What I'm going to talk about is the world of Sci-Fi/Fantasy and how that has in a way fed this.

I'd like to start by saying most of the examples of these injustices are from media that I love. They're great stories, written by great people, but they have flaws. If you show me a story without flaws I'll show you the dreamland you are certainly living in. Additionally, if you try to tell me that I shouldn't be reading something written by people who disagree with my core beliefs, I'll give you this look: 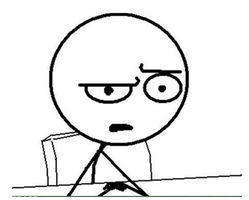 Mostly because, let's be real, no one in the world actually agrees 100% with another person. And even if they mostly agree, it gets boring standing around patting each other on the back because you're both so right. So you eventually find something that you disagree about. I think I can safely point to a large portion of Christian culture to validate that statement. ANYWAY...

Going back to the Sci-Fi/Fantasy realm, which includes books, shows, movies, art, and any other form of media you can think of. I've been a fan of this for years, and I still am, but it doesn't stop me from looking around and seeing that women get the short stick for awhile. We who are fans of the revolutionary nature of cultural commentary of this genre love to point out that we rock at representing women. And I think in some ways we do. But can we really say that if part of our criteria is that we even involve women in the first place, and make them into real characters, not just set pieces? Some of the books that I can think of are remarkable simply because there were women. There were a whole lot more men, doing more epic things, but because we had a couple of women doing something valuable, it's a win.

Take Lord of the Rings. The books mostly, the movies did a bit better with it (which purists bemoan, whatever). I've spent a significant amount of time dedicated to this series, but the presence of women in it is negligible except for one main instance. "No man am I." Eowyn. Shield-maiden of Rohan. Total badass. She disobeyed orders to stay home and take care of the women and children, dressed up as a man to ride with her uncle's army, took Merry with her to make sure he got to where he needed to be, and in the end (with Merry's help) managed to slay the most powerful dark force in the battle, aside from Sauron. The Witch King of Angmar, the one no man could kill. She did. It was brilliant.

Aside from that, the presence of women in the books is minute. There's Arwen, who you only really see in Rivendell and at the very end. She mostly exists to give Aragorn something to fight for, given that she can only be with him if he accepts his rightful place as King of Gondor. Then we have Galadriel who is powerful, yes, but distant for most of the book, unwilling to use her power to do anything but protect Lorien. Though in fairness, that's a failing of the Elves in general deciding that the time was right for the Men to, well, Man up and take over Middle Earth so the elves could go back to the West. Every other woman is a minor character that shows up either in passing. And those three are pretty cool. But there are no less than 15 main male characters in this book who overpower the narrative of the books. Again, not that it's a bad book. I love it. I'm just pointing out that women are thin on the ground.

If you need any more proof on the Tolkien front, I'm pretty sure that Peter Jackson added Tauriel to the Hobbit movies just to get some gender representation in there. Which did the story no favors, but whatever. It's there. And I'd be willing to be that he'd get in trouble with a lot of people if he hadn't done that, even if the book purists would have been happier.

What about not Tolkien? There are some people who actually do really well, in my opinion. For instance, Lewis in the Narnia series. The whole story is initiated by Lucy, Susan plays a huge role when she's present, one of the main people responsible for Caspian's education in the Old Ways is his old nurse,, Aravis in Horse and His boy, and Jill who is great. There are a great number of female Animals who are big players. Of course, there's also the fact that the main villain is a Witch who frequently uses her "feminine wiles" to trick people. But there are also evil guys, not the least of which is Miraz who is the epitome of a evil feudal lord. So I think it sort of evens out.

It's funny to me that Orson Scott Card is one of the best writers when it comes to involving women in important and possible ways, in just about every book I've read of his. Being that he's a Mormon, who are great people, but not exactly known for their progressive cultural views. Others are not so surprising to me. Joss Whedon has established a great body of work that includes some of the best female characters. Tamora Pierce is my absolute favorite because of the work she does on this front.

The problem, as I think about it more, is not really within the content creators. At least not most of the contemporary ones. It's within the fans, who are many of the same people who are fans of video games, who complain about how women are overtaking everything in their quest to be heard. Which isn't true. We'd mostly just like to be represented. And with more than one character for every 5 male characters. My thoughts on women's place in culture are many and varied, and I'll probably touch on them again later, because we cannot all be Eowyn (as much as I want to, because she is really cool). For now the point I'm trying to make is that the firestorm of GamerGate is going to eventually have to reach the Sci-Fi/Fantasy world and change the way everyone writes women and thinks about how female characters are represented. I'm not even pulling for only strong female characters, which is what a lot of people seem to want. Because that's not necessarily real. Real is having some who are strong, some who are weak, but to portray them all as having value. That's what will change the world.

More on this later.
Posted by jfhobbit at 1:25 PM