Depending on how familiar you are with children, or more specifically Children's TV, you may have already guessed what this post is about. Here it is, the moment when I put it out to public knowledge... I absolutely love My Little Pony: Friendship is Magic.

Yes, this is a children's show. Yes, I am a mature adult. Yes, this is actually a phenomenon that I was aware of before getting into the show. I figured, if there was such a huge contingency of Bronies, as they are called, on the internet, there might just be something to it! Actually, what really happened was that I lived with 7 year old girls and they introduced me to the show so I could play with their Pony action figures and actually know who was who. But then I fell in love with it, to the point where I was just as excited as the girls when Season 4 hit Netflix.

Here's the thing about this show: It's really well written, and it's clearly (to me at least) written by pretty nerdy adults who wanted to create a show that they would like as much as the kids they were writing for. That's really the mark of all great Children's Lit, in my opinion. It's just as enjoyable when you're an adult as it is when you're a kid. You get different things out of it, that's for sure. I mean, I seriously doubt that the two girls really understood the significance of Doctor Whooves popping up (which I fangirl over every time, seriously), or the fact that there's a mystery episode where direct ties to Agatha Christie and Sir Arthur Conan Doyle. Or the fact that there are so many subtle puns threaded through the dialogue.

Plus, there's the whole point of the show. It really is about how having deep friendships with those around you creates a sort of magic, the magic of a tight community full of people who would do anything for their friends. The fact that anyone is talking about that concept in any way is always great. The fact that they're doing it in a way that so many people love is even better. They have the characters facing really tough situations, areas in which many adults fail to make the right choices. They show how difficult it is to make the right choice, and the consequences when you do both the right thing and the wrong thing. I'm constantly surprised by the depth of the episodes.

And then there are the just plain fun things. I already mentioned Doctor Whooves, who is occasionally seen with a pony who has a rose on her flank. There's Discord who is the most lovable villain this side of Loki. There's the superhero episode, featuring the wonderful FlutterHulk. There's the episode where Rainbow Dash becomes obsessed with reading, something she swore she'd never do. And then of course, there's Spike, the awesome dragon who so does not get enough credit for everything he does. Even Hank Green thinks so. I dare you to listen to this song and not smile.


Honestly, this show and it's persistent happiness kept me upbeat even when I was dealing with overnight shifts and all the personal upheaval those bring. It reminded me why I do many things that I've gotten in the habit of doing, and it challenges me even now when I re-watch episodes in areas that I know I need to get better in.

So that's mostly it. I also found this post explaining 10 Reasons You Should Watch My Little Pony, just in case anyone is thinking of taking the plunge. I promise you won't regret it if you do.

(Also, I just found out from this article that I'm officially a Pegasister. Kudos to them for finally giving me a name for that, since apparently all anyone else knows about are Bronies.)

P.S. I do have a favorite pony. His name is Big Mac. He's the funniest non-verbal character ever. Also, oddly handsome. 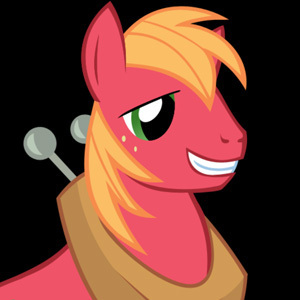