No, I promise I won't quote the song. I didn't even really like the song until Pentatonix covered it, and then I warmed up to the original too. Just in case you haven't looked that up, you should. But that's not the basis for this post.

The basis for this post is the idea that I've been wrestling with about Identity, particularly as a Christian. [Quick disclaimer: Because I'm a Christian, this is by necessity a very Jesus-y post. Read on if you want my view on such things. Or if you're just curious about how I think about my life.]

There are a number of Bible verses that speak to Identity. I was reading in 1 Peter over the last week, where Peter encourages the recipients of the letter to embrace their identity as a Royal priesthood (chapter 2, if you're interested). The writer of Hebrews goes to great lengths to establish connections between Jesus and Melchizedek, the first royal priest (who predated the Levite priesthood by at least 500 years). Melchizedek was considered the first priest who ministered to Abraham in the days after a major battle. Melchizedek was also a King. The writer of Hebrews draws that into the discussion of Jesus's identity, saying that Jesus is of the Order of Melchizedek. Jesus has both royal authority and the authority of the most righteous man in history.

This is important, because the Bible also draws direct lines between Christ's identity and the identity of those who believe in him. For one thing, the whole reason we're called Christians in the modern world is because we are supposed to be Christ-like. To do that effectively requires us to take part of His identity onto us. For another, Paul points out in Romans 8 that we are heirs and co-heirs with Christ, based on our acceptance of the Spirit that ties our spirits to Him. Paul echoes this in Ephesians 1 and 2, which totally worth a full read. The point of this is that as heirs, we are given the same inheritance from God that Jesus got, and we also receive the status and privilege as heirs.

Which brings us back to the idea of royalty. When you're an heir to a title of authority, it changes everything about your life. I'm thinking of Downton Abbey, when in the first episode the heir is killed and a distant relative who is leading the life of a barrister in London is brought out of his comfortable existence into the life of an heir. He has to adjust to all sorts of things, from being assigned a valet that he's not convinced he needs to the prospect of his marriage determining the fate of a whole estate. Things that the former heir had presumably grew up with. For him, coming into it as an adult, it's a big adjustment and it takes him a long time to adjust to it. And this isn't even a family that's close to the crown, in the scheme of nobility. They're a couple of rungs down the ladder.

In a way it makes sense that it takes any of us in the modern age a bit of time to adjust to this idea of power and authority in our lives. Particularly in America, where nobility and rank aren't typically part of our sensibilities. Having very loudly not had a king for over 200 years, Americans rebel a little against the idea of royalty in any area of our lives. Which is probably why it took me a long time to get over the fact that I just couldn't wrap my head around the idea to see myself through that lens.

In my own experience, this is one of those things that not very many Christians get. The idea of us being a part of God's family, His beloved children, His heirs, is the most life changing thing about Christianity in my opinion. The whole eternal life thing is great, don't get me wrong. But that doesn't help me out a ton until I die, and I don't plan on doing that for a long time yet. So at one point I went searching for what I could do until then. I found Jesus saying, "I have come so that they may have life, and that they may have it more abundantly." (John 10:10b, NKJV) That set me off on a whole search for what "life more abundantly" could actually look like in the midst of the every day grind.

The main way that this affected me was that I had to come to terms with my identity as a beloved Child of God. I have touched on this before in my old blog. I have not had the best track record with self-confidence and loving myself, or just simply not hating myself. So I have been dealing with a lot of overhauls in those areas, and one of the things that has really impacted me is the idea of royalty.

Just last night I was presented with this: 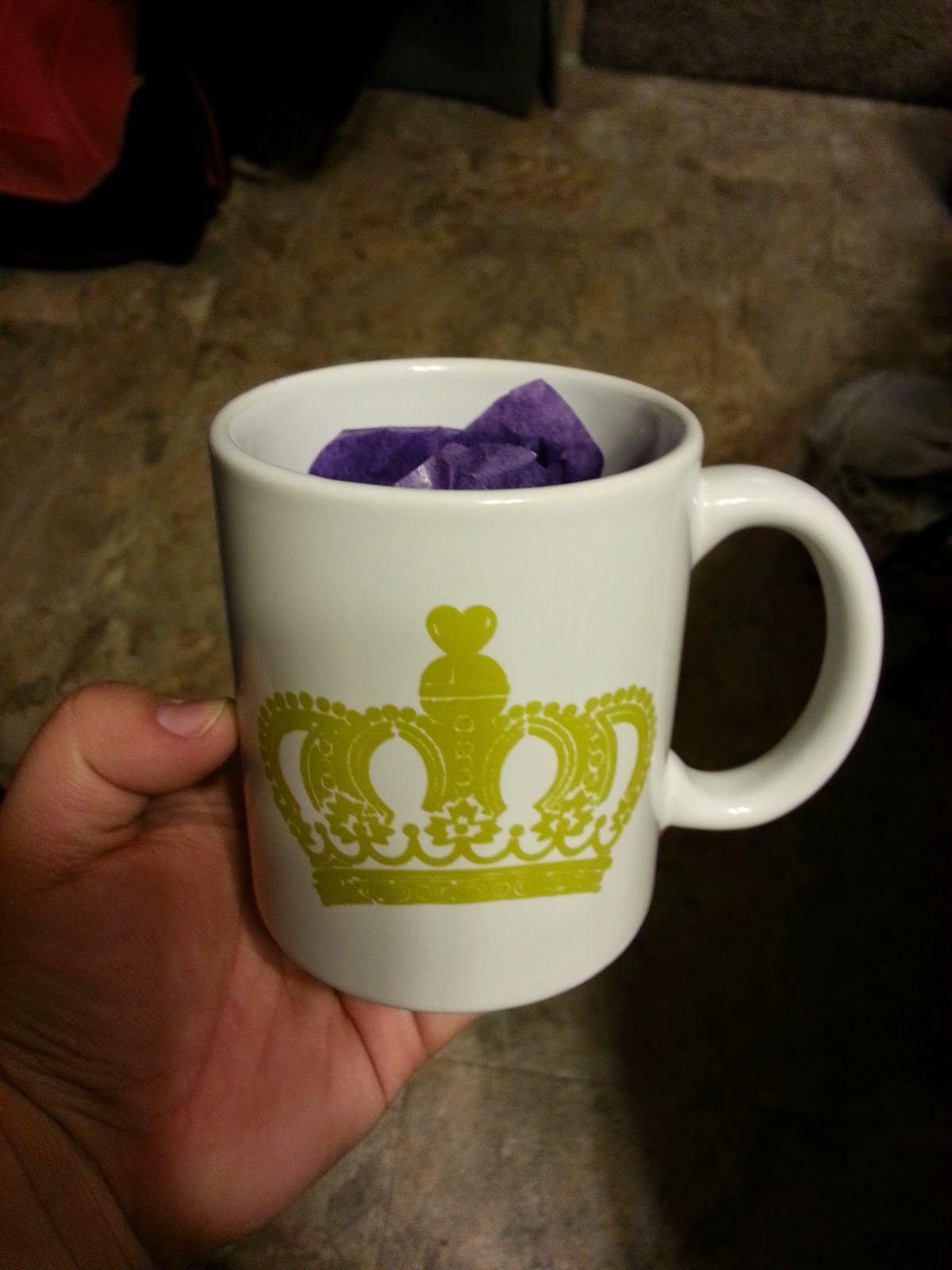 We had a present night at the School of Leadership, where we chose a mystery gift and then had to open in front of the group. Sorta like White Elephant, but without the stealing. Which is good, because I would have fought someone over this. For one thing, it's a crown. For another, it's a sort of greenish crown, and I love all forms of green, even this one. The purple thing inside is a paper crown from the Christmas crackers we got first. I got a purple one from mine, but it had just ripped when I went to open my gift and someone gave me theirs as a replacement. It was a pretty great set of things that were spoken over me, and a lot of it echoed themes of stuff I've been thinking about and working to implement in my life.

God is my favorite, because He knows that I have to hear about it from multiple different people, and also in what I read and listen to, before I finally get it. So when He's trying to tell me something I see it and hear it EVERYWHERE. Even in a casual conversation where one sentence the other person says is enough for me to tick my eyes upward with an internal, "okay Jesus I get it."

That's what has happened with this subject. In my own chats with God and in words that have been spoken over me, there is a consistent theme of royalty or nobility. Swords that represent different areas of my life, names that He has told me He calls me, this whole thing with the crowns, a word about me needing to learn a lesson from Elsa who was a queen who was afraid of her own power. I could go on. The whole point I've been taking from this is I need to kick my ideas about not being good enough to the curb. Because God says, in the Bible and through His other servants who I trust to hear Him, that I am awesome and should act accordingly. Not in a super arrogant way. In the way of knowing who I am and what my gifts are, and how I am called to use them, and not swaying from that. Also, utilizing the power and authority granted to me in the Spirit. Which is a pretty spectacular thing, and I'm starting to build that muscle a bit. That's my larger goal.

I have to start small. My goal for right now is to be more bold, and also to be able to accept a compliment gracefully, which is something I majorly struggle with. I'm working on it though, and continuing to take in the times in which God comes around me and reminds me, reassures me that I'm on the right path and I'm moving down it. Even if it feels like I've been stuck in the same place. I'm not. I've changed and grown and I'm continuing to do so.