On Marching and Morals

By now, much has been said on the global mobilization of women that started with a plan to march on Washington D.C. the day after President Trump's inauguration. I recognize this, but there's a part of me that cannot keep silent about some of the issues I've seen crop up in the days since the march.

But first, some pictures: 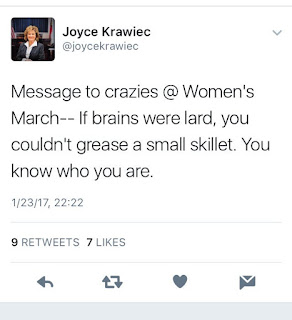 For context, this comment appeared on Twitter on the day of the Women's March from a state senator in North Carolina (it has since been deleted). The second picture is her Twitter bio.

I'm going to focus on one particular sentence in her bio: "Restoring freedom & liberty as bestowed upon us by God, our creator."

Well yes, God has given us freedom and liberty. In fact, that God-given freedom usually manifests itself in this thing called free choice. It means the freedom (upheld by our Constitution, incidentally) to peacefully demonstrate against policies or governments that we disagree with. It also means the freedom for you, ma'am to levy the most stereotypically Southern insult at people who are fighting for YOUR RIGHTS. Goes both ways.

The senator later clarified that the comment was not directed at the majority of the marchers, just the ones who were "dressed provocatively" and "spewing profanities." No mention that the main "profanity" used was the word "pussy", which was thrust into mainstream vocabulary by none other than the 45th President of the United States when he was bragging about sexually assaulting a woman.

Words have meaning, true. But that meaning is often assigned by the cultures around it. Frankly,  in the grand scheme of things, I'm all for a group of women actively turning a term that has been used to oppress them into a battle cry. It has a poetic quality to it.

Clearly, I was in support of the Women's March. If I had thought about it before 9 am on Saturday morning, I would have been out at the one in Sacramento because they are supporting issues that I believe in.

I believe that women should have equal access to health care, and not have to pay extra for services that are gender specific.

I believe that women should not have to fear not being believed when they report an assault.

I believe that women should not be judged morally (or any other way) on how they dress. Nor should their intelligence or sanity be maligned because of their appearance.

I believe that the global outpouring of support was a sign of bigger things to come, as women around the world start mobilizing against the system that dictates that men should determine the access we have to basic health services, education, and job opportunities.

To the women who are speaking out against these movements (and basically every other feminist movement in history), do you not realize that by accepting your oppression you are feeding into the system? If you feel like you're perfectly fine with the state of things for women, read this.

And now, to address the main beef that many conservative Christian women had with the Women's March: the pro-life, pro-choice debate.

If you hadn't heard, days before the Women's March, the organizers removed a number of feminist pro-life groups from their list of official partners. This sparked a huge outrage from Christians who immediately declared, "SO MUCH FOR THEIR EQUALITY IF THEY DON'T WANT US WE WON'T COME SO THERE!" (caps for emphasis and the dramatic quality of many of these posts).

I think that was a dumb move from the organizers. It did undermine the sense of unity there was in the movement before. On the other hand, considering the general cultural view of pro-lifers, can you really blame them? We as pro-life advocates have not really cultivated an image of being willing to cross the aisle and play nice with others.

A number of my friends who do identify as pro-life still marched with some of the Sister Marches and reported that the attitude towards them was different than that of people at the top. So I'm thinking this was just one more chapter in the book of, "stupid moves that resulted in more division, instead of solving the problems."

However, I still have to address the attitude of Christians who responded to that move. Again, I include myself in this because I'm guilty of it: We, as a subculture, are not super great at turning the other cheek. Instead of saying, "well, just because we aren't listed as official partners doesn't mean we can't still march for the six other social issues that we agree on," most defaulted to the basic, "FINE THEN!" and storming off.

Or, you know, denigrating those who are marching on Twitter.

The more I look at this issue, the more I believe this dichotomy was created by men who just wanted to create another issue for women to be divided on. That may be overly dramatic, but it all seems so ridiculous to me. As a pro-lifer, I would ideally like all women to be presented with choices for their health care, especially reproductive care. This seems to be what pro-choice advocates for as well.

The problem I have is, when did the main definition of "pro-life" become "making abortion illegal"?

As someone who pays attention to social sciences, I have recognized some trends in the research. It was widely reported that the rates of abortions in 2015 hit their lowest point since Roe vs. Wade. Wonderful. Splendid. How did that happen? Oh, it was because of improved services for women, particularly low-income women and high school students, allowed them to get better access to safe birth control and education to reduce the overall rate of unplanned pregnancies.

To be clear, that is not the same thing as criminalizing abortions. I wrote a whole post on this issue. I think that creating that line in the sand of legalizing/not legalizing abortion, at this point in time, is absolutely insane.

Why don't we focus our collective resources on making sure our society has systems in place to support women who decide to have that baby? Or to help her have the option to not get pregnant if, say, a guy forces himself on her. Or help her get a job and still be able to care for her child? Or to be able to still get an education if she finds herself with a small child and few life skills?

Isn't that what the Women's March was ultimately about? An outcry against a government filled with old, rich, white men who refuse to listen to women about women's issues? Against the women in power who seem to think that just because they managed to get there, everyone has those opportunities?

My point is, rather than creating false dichotomies, we need to work together. Instead of telling me about how they don't respect you, show some respect. Instead of complaining that the other fighters don't agree with you, take a page from history where countries with wildly different values regularly unite against common enemies.

My final thought on this is simple: When was the last time the Church managed this sort of showing of unity and community? Honestly, I am asking. Please give me an example. Because maybe we're just mad that they figured something out about how to organize a worldwide movement that - except for a few - was inclusive and accepting of people with different values.

If that is the case, we need to get something straight. You don't get mad at the people who've got their finger on something powerful. You learn from them, you figure out what you are doing wrong, and you maybe admit that you don't have it all perfect after all.

The best thing about Jesus is that He is graceful with us when we get things wrong. We always have His support when we screw things up, and His help in fixing them.

So consider fixing something instead of burning it all down over one point of offense. Fix a relationship with someone who doesn't agree with you, instead of sniping at them on Twitter.

Just a thought.
Posted by jfhobbit at 3:08 PM